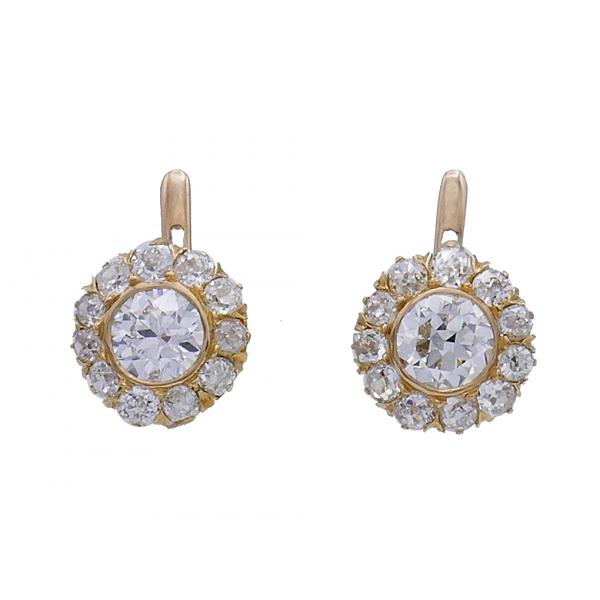 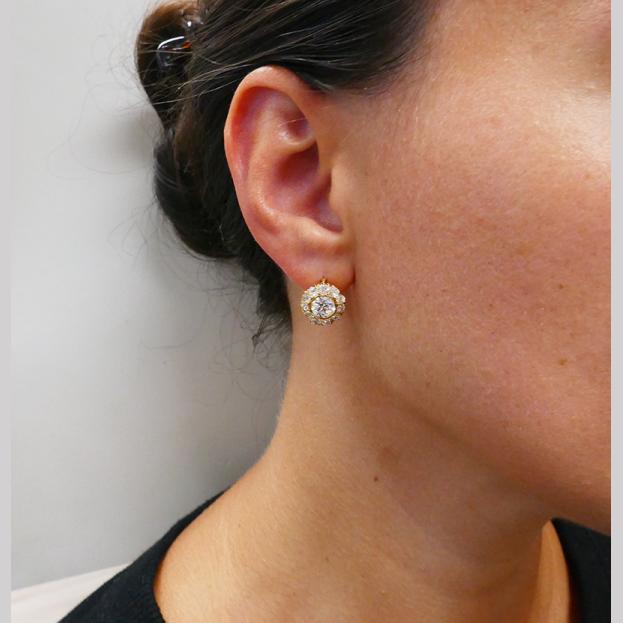 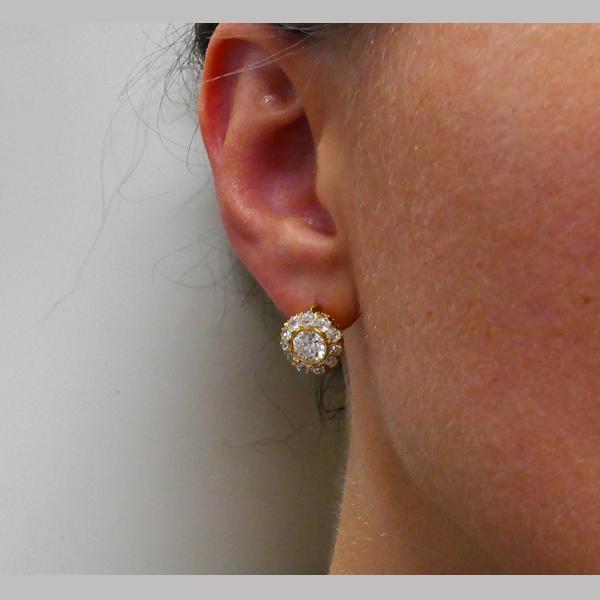 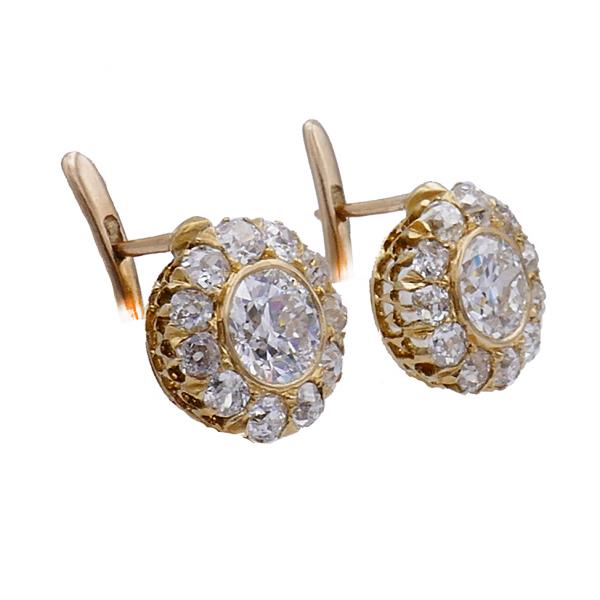 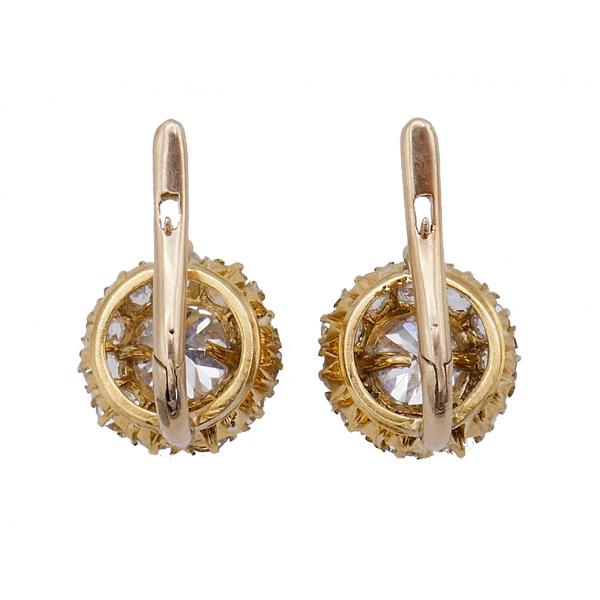 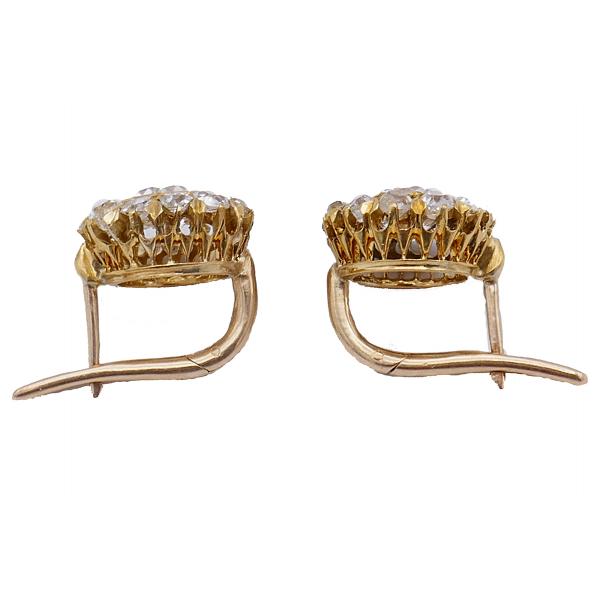 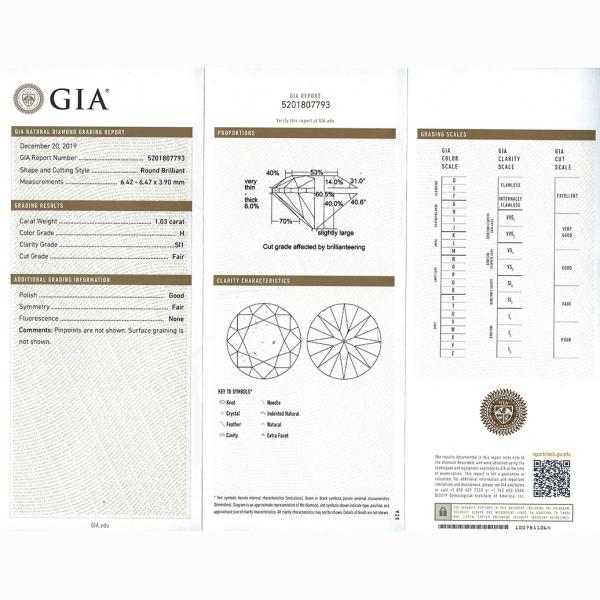 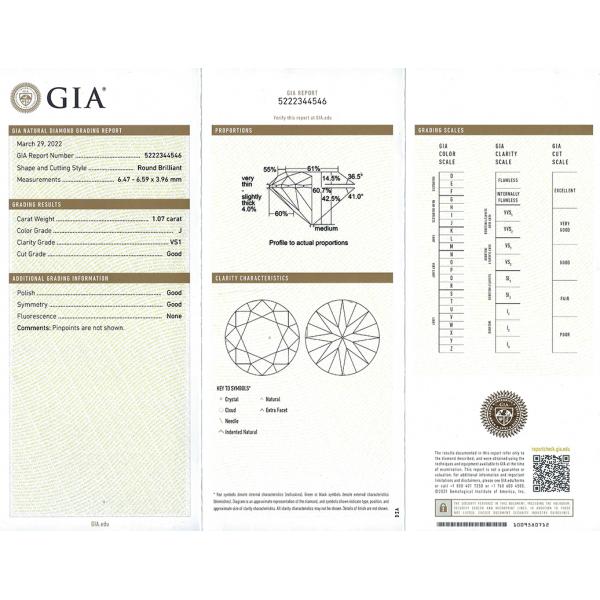 A fabulous pair of Victorian earrings in 18k gold, featuring diamond, with a classic cluster design.

The open back claw setting allows a larger amount of light enter the diamonds. It truly reveals the beauty of the gemstones and makes them shine brighter that the closed setting. Because of the setting, the back of these diamond gold earrings looks neat and attractive as well as the front part.

Based on the earrings design and diamond cut — Old European and Old Mine – the earrings most likely belong to the Late Victorian era (1860-1900).

The earrings are equipped with the hinge back closure.

Victorian jewelry is dated from 1837 to 1901. The era’s name was inherited from Queen Victoria who reigned during that time. Her significant input shaped the jewelry style of that time.

To navigate in such a vast period, historians divide it into following parts:

Different materials, gemstones and techniques were popular specifically for each era. Some styles though remained in favor longer than during just one period. For instance, hair jewelry made its way through Romantic to Grand period. Snake and animal motifs were also in demand throughout the era.

As to the Queen influence, Romantic Period jewelry had well pronounced sentimental vibes. It was the time when young Queen Victoria was in love with her husband, Prince Albert. And the whole nation admired their relationship. Cameos, matching brooches, miniature portraits and lockets reflected the likeness of loved ones. After Albert’s passing in 1861, the Early Victorian Period ended, and The Grand era began.

After the incandescent bulb invention in 1870s, diamond jewelry started thriving like never before. Diamonds, being placed under the electric light, revealed their dazzling nature and looked truly fascinating.

Opulence and larger scale prevailed in the Grand Victorian jewels style. It was the time of booming economy, and jewelry makers picked up the trend.

The Late Victorian jewelry makers stepped away from creating massive, heavy pieces. Women lifestyle changed towards independence. They got involved in new activities such as bicycling and tennis. To keep up with the new clientele’s needs, Late Victorian pieces were lighter and more wearable. Attached safety pins became very handy and this element is the era’s design feature.

Tiffany & Co. introduced their first solitaire diamond engagement ring during the Late Victorian time. Etruscan and Egyptian revival, along with the Oriental motifs kept being popular. Another typical style for the period was a choker necklace.

The Aesthetic period and the whole Victorian era ended with the Queen Victoria’s passing in 1901.

Explore our collection of the Victorian jewelry here